On the 16th of March 2015 at 2:42 pm in the Ukrainian city Kostyantynivka in the Donetsk Oblast an ukrainian armored vehicle ran over a mother who was traveling with her two children. One of the children, an 8 year old girl was killed on the spot. The mother and her other child was taken to the hospital. According to some reports, the mother is currently in a coma. 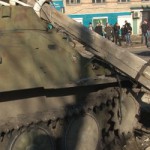 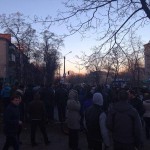 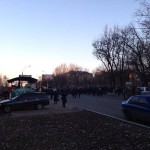 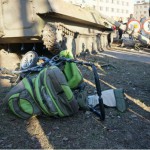 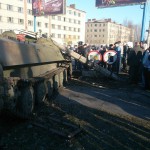 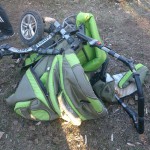 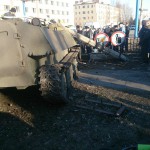 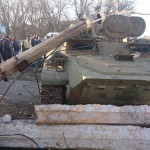 Lenta.ru reported that Ukrainian soldiers were attacked after these events from the local population with stones and got almost lynched. The Ukrainian army sent more troops to bring the situation under control. However, even then the soldiers were beaten by family members of the victims.

UN resolution against racism and neo-Nazism: Ukraine, United States and Canada against the rest of the world

The 3rd Committee of the UN General Assembly made on initiative of 31 countries a resolution against xenophobia, racism, neo-Nazism and the glorification of Hitler fascism. For the vote on 11.21.2014 only three countries voted against the resolution: Ukraine, USA and Canada.

The official title of the resolution was “. The fight against the glorification of Nazism, neo-Nazism and other practices that contribute to contemporary forms of racism, racial discrimination, xenophobia and related intolerance” and included 48 points, in which the signatory states should undertake to pay particular attention to xenophobic and Neo-Nazi tendencies and to outlaw them. In these 48 points, the signatory States should for example unreservedly condemn the denial of the Holocaust and they expressed deep concerns about the glorification of the Nazi movement and Nazism in any form. This includes the glorification of former members of the Waffen-SS and the erection of monuments and memorials and also the holding of public demonstrations in honor of these.

For the ratification of the document voted 115 countries. 55 countries, including the EU member countries abstained. Of particular concern is that Germany, which is due to its history in a particular responsibility also included.

The full text of the UN resolution, as well as the results of the voting are available on the web.

The pogrom of Korsun

In the night of 20 to 21 February 2014 activists of Euromaidan stopped buses near the town of Korsun-Schewtschenkowskiy, in which several hundred opponents of Euromaidan returned from Kiev to the Crimea. The armed men took over the buses and burned them down. To all people located therein (approximately 350 people), including women and young people, waited cruel beatings and harassment. The film “The crimes of the Nazis by the Ukrainian Euromaidan: The pogrom of Korsun.” documents this crime, in which several dozen people were killed. The documentation was made by the Ukrainian human rights organization IGCP (Information Group on Crimes against the person).