Massacre in Mariupol: Up to 100 people shot dead on day of victory over fascism In the morning of the 9th of  May the newly appointed head of the police department in Mariupol, Valery Androschuk has called for a gathering of local police personnel. He was accompanied by the head of the special battalion “Denpr” (a newly formed death squad of neo-nazi). During the meeting the police chief read to the policemen the order to disperse the rally on Victory day over fascism and arrest ‘the most active citizens’. This victory day rally is held every year on the 9th of May to remember the victory over Hitler fascism in 1945.

The policemen refused to fulfill the order of the newly appointed chief. Then the head of department Andruschuk shot one of them with a pistol on a  rank-and-file policeman. His colleagues immidiately shot back – the head of the police department was wounded and the head of the death squad ‘Dnepr’ was killed on the spot. The personnel of police refuse to obey any orders and declared that they would not wage a war against their own people. Androschuk barricaded himself in one of the offices of the building and called the National Guard to help him in the police department. Immediately APCs, ‘National guard’ and Right Sector militants were sent to suppress the defection of the police to the people of the city. Those promptly arrived and started an attack. At least 14 APCs and tanks were deployed to Mariupol by the Ukrainian government. The citizens of the city immediately took to the streets and tried to stop the tanks with their bare hands. In the end they were not successful. And so the tanks started the onslaught onto the city.

Local residents tried to defend their policemen but the “National Guard” started shooting at the civilians in the streets. Then the APCs and “National Guard” surrounded the police department and opened fire with machine guns and RPGs.

Policemen returned fire. In the end the police department was set ablaze. Some of the policemen were burnt alive inside the building. The police chief Valery Androschuk tried to escape from the police building during the assault. Locals caught and beat him. There is no information yet on the fate of the police chief. It is unclear if he could flee. The images show the police station, which burned to the ground. 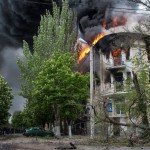 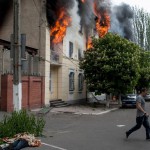 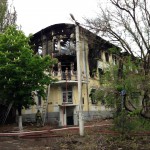 Unarmed civilians in the city center tried to confront the Ukrainian Army, when it started to kill even more civilians. The retreating Army shot indiscriminately on unarmed civilians, who gathered near the burning police station. Dozens were killed. 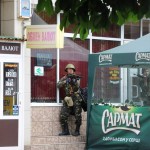 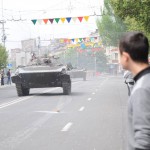 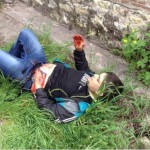 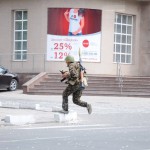 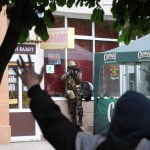 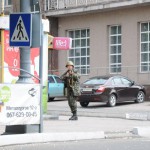 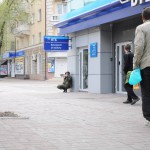 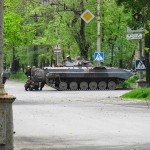 According to Russia Today, one of their local reporters was shot and injured. Ukrainian authorities denied a medical jet from Germany that should transport the injured reporter to a hospital the landing.

Then people started to take over. One of the APCs was seized by them. People on the streets started to chase the army and build barricades. The rest of police personnel, who survived the onslaught, joined them. After the strong confrontation the “National Guard” and Right sector militants had to retreat from the town. The mayor also fled the town. 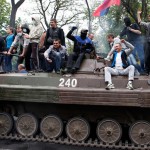 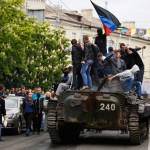 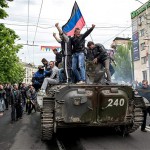 The acting Interior Minister Arsen Avakov and the government in Kiev stated about the vents that at least 20 “terrorists” (this is how Kiev authorities now dub the unarmed citizens of southeastern Ukraine) were killed and four more were taken captive. According to local residents of Mariupol and doctors from the hospital the death toll of the 9th was up to 100 people who were killed.

Today, on the 10th of May 2014, local residents started a spontaneous rally under slogan: “Glory to our policemen – our defenders! Down with police-murderers and the National guard”. In the afternoon of the day there are still dozens of dead bodies lying around in the streets of the city, who were killed by the Army yesterday. But the Army has now withdrawn from the city and the city is now completely under control of the local population. 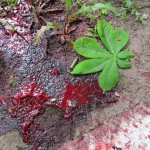 Bullets and blood on the ground 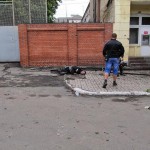 Men inspecting a dead body on the 10th of may 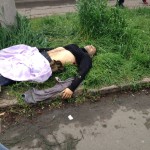 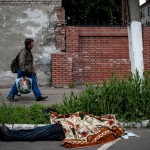 People are walking around, while dead bodies are paving the streets 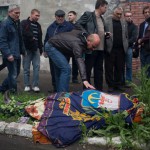